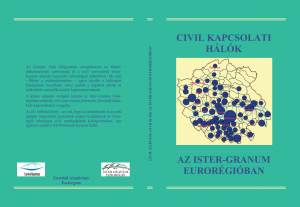 The European Union strongly encourages the operation of regional associations based on the cooperation of state and local government organizations and non-governmental organizations. Nowadays, mainly in the literature, there is more and more talk about a Europe of networks, meaning a system of contacts between the actors that structure and operate the regions.

The research, on which the book is based, examined the characteristics of the non-governmental organizations operating in the Ister-Granum Euroregion and the developed relations between them. The aim was, among other things, to serve as a basis for the development of a possible civil strategy for the Euroregion, within the framework of a reorganized Civil Parliament, based on the results and the resulting proposals.

Bridging the Gap: Cross-border Integration in the Slovak–Hungarian Borderland... From the Coexistence of Border Zones to Integration: Characteristics of Croatian-Hungarian...
Scroll to top