You are here: Home1 / The Determinants of EGTC Development in Poland 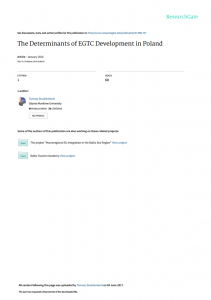 The Determinants of EGTC Development in Poland

A comprehensive interpretation of the European Grouping of Territorial Cooperation (EGTC) requires interdisciplinary studies, with particular focus on economic aspects. An EGTC is an innovative legal instrument of the EU and an economic tool developed to improve cross-border, transnational and interregional cooperation. Fifty EGTCs had been established in Europe by the end of 2014, including 3 EGTCs in Poland.

The aim of this article is to indicate and discuss the key determinants of development of such institutions, as well as to point out barriers and present proposals to overcome them. The operation of Polish groupings in view of European ones was discussed in this article. A working model describing internal and external determinants was developed. In the context of cohesion policy, it was proved that objectives and tasks of the groupings are coincident with the objectives of the European Territorial Cooperation. Previous original studies on EGTC development in Europe were used. Legal documents were analysed, a survey and interviews with directors of EGTCs were conducted in 2015.