You are here: Home1 / The role of the EGTC in cross-border spatial planning 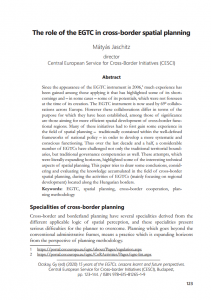 The role of the EGTC in cross-border spatial planning

Since the appearance of the EGTC instrument in 2006, much experience has been gained among those applying it that has highlighted some of its shortcomings and – in some cases – some of its potentials, which were not foreseen at the time of its creation.

The EGTC instrument is now used by 69 collaborations across Europe. However these collaborations differ in terms of the purpose for which they have been established, among those of significance are those aiming for more efficient spatial development of cross-border functional regions. Many of these initiatives had to first gain some experience in the field of spatial planning – traditionally contained within the well-defined frameworks of national policy – in order to develop a more systematic and conscious functioning.

Thus over the last decade and a half, a considerable number of EGTCs have challenged not only the traditional territorial boundaries, but traditional governance competencies as well. These attempts, which were literally expanding horizons, highlighted some of the interesting technical aspects of spatial planning. This paper tries to draw some conclusions, considering and evaluating the knowledge accumulated in the field of cross-border spatial planning, during the activities of EGTCs (mainly focusing on regional development) located along the Hungarian borders).

(Re)birth of a twin city. Hinterland analysis in the region of Esztergom-Š...

Linguistic and ethnic border changes: within the frames of Ister-Granum Euroregion...
Scroll to top