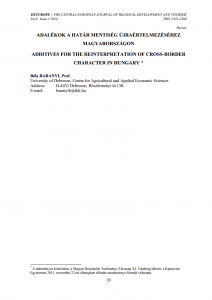 The radical geopolitical restructuring after the First World War resulted in new states and state borders in Central Europe. As a result of the bargaining of great powers, the newly developed national states became the main barrier to the extension of interregional relations in Central Europe and mainly in Hungary. The hostile relations and mistrust coming from the new situation was not favourable for the relationship of Hungary with its neighbours.

In addition to the new borders set by the Treaty of Trianon (1920) which drastically re-shaped the map of the Carpathian basin, as well as the unprecedented loss of territory and population, socio-economically, infra – structurally and ethnically organic spatial structural units and real regions were cut into pieces. For this reason, Hungary needed to reposition its cross-border relationship system in the decades to come.