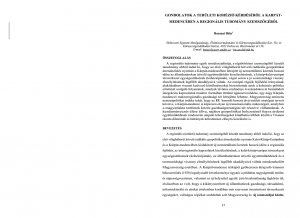 The study takes an approach from the perspective of regional history and it assumes that the new nation-state frameworks, which were established in the Carpathian Basin in the wake of the radical geopolitical reorganization after the First World War, have ultimately become the main obstacles of good neighbourly relations and deepening of these relations.

On the other hand, processes of cohesion policy could provide favourable conditions for shaping the development directions of the European regions which were formed over centuries, thus reorganization of relations between the regions through integration process and the creation of a large Carpathian macro-regional economic space. It is therefore in Hungary’s eminent national political interest, following long-term territorial strategic plans of the EU, that the Carpathian Basin also forms a new transnational macro-region in which the Hungarian-inhabited areas could become part of a common economic strategic space.

Hungary could stand at the forefront, due to its own geopolitical situation, and could promote a system of meaningful cooperation that could address the dilemmas and disadvantages caused by Trianon.