You are here: Home1 / Europe’s culturally diverse borderscapes: The EGTC from the perspective o... 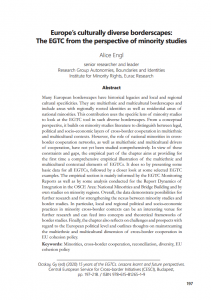 Europe’s culturally diverse borderscapes: The EGTC from the perspective of minority studies

Many European borderscapes have historical legacies and local and regional cultural specificities. They are multiethnic and multicultural borderscapes and include areas with regionally rooted identities as well as residential areas of national minorities. This contribution uses the specific lens of minority studies to look at the EGTC tool in such diverse borderscapes.

The empirical section is mainly informed by the EGTC Monitoring Reports as well as by some analysis conducted for the Report Dynamics of Integration in the OSCE Area: National Minorities and Bridge Building and by own studies on minority regions. Overall, the data demonstrate possibilities for further research and for strengthening the nexus between minority studies and border studies. In particular, local and regional political and socio-economic practices in minority cross-border contexts can be an interesting venue for further research and can feed into concepts and theoretical frameworks of border studies.

Finally, the chapter also reflects on challenges and prospects with regard to the European political level and outlines thoughts on mainstreaming the multiethnic and multicultural dimension of cross-border cooperation in EU cohesion policy.

Bridging borders through institution-building: the EGTC as a facilitator of... Some Legal Aspects of Cross-border Cooperation
Scroll to top