You are here: Home1 / For more place-based approach – Position paper of CESCI on the Future... 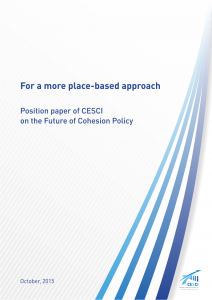 This short position paper is rather a modest recommendation promoting the ’place-based approach’. The compilators of the document would not like to deny the definitive role of economic governance, ex-ante conditionalities, the net payers’ interests, the need for concentration of resources and the role the indicators play in all this game. They only would like to draw the attention to the weak representation of territoriality in general within Cohesion Policy. According to our point of view, efficiency, what could be the way to measure the results of the cohesion policy rests on setting territoriality into the heart of European policies.

Decision supporting background study for the establishment of the ECR EGTC

Report on the impact of Madrid Outline Convention and its protocols on cross-border...
Scroll to top