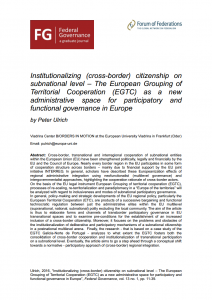 Cross-border, transnational and interregional cooperation of subnational entities within the European Union (EU) have been strengthened politically, legally and financially by the EU and the Council of Europe. Nearly every border region in the EU participates in some form of cooperation structure across borders mainly due to financial support by the EU joint initiative INTERREG.

In general, scholars have described these Europeanization effects of regional administrative integration using neofunctionalist (multilevel governance) and intergovernmentalist approaches, highlighting the cooperation rationale of cross border actors. On the basis of the EU legal instrument European Grouping of Territorial Cooperation (EGTC), processes of re-scaling, re-territorialization and paradiplomacy in a “Europe of the territories” will be analyzed with regard to inclusiveness and modes of subnational participatory governance. In general, policy making and strategic developments of the EU regional policy, particularly the European Territorial Cooperation (ETC), are products of a successive bargaining and functional technocratic regulation between just the administrative elites within the EU multilevel (supranational, national, subnational) polity excluding the local community.

The aim of the article is thus to elaborate forms and channels of transborder participatory governance in EU transnational spaces and to examine preconditions for the establishment of an increased inclusion of a cross border citizenship. Moreover, it focuses on the problems and obstacles of the institutionalization of deliberative and participatory mechanisms of a subnational citizenship in a postnational multilevel arena. Finally, the research that is based on a case study of the EGTC Galicia Norte de Portugal analyzes to what extent the EGTC fosters both the consolidation of cross border cooperation and institutionalization of transnational pa rticipation on a subnational level. Eventually, the article aims to go a step ahead through a conceptual shift towards a normative participatory approach of (cross border) regional integration.

EGTC – the EU’s new instrument of European Territorial Cooperation Prog... Participatory governance in the Europe of the (cross-border) Regions. –...
Scroll to top