You are here: Home1 / EGTC: A tool for fostering spatial justice in EUropean borderlands 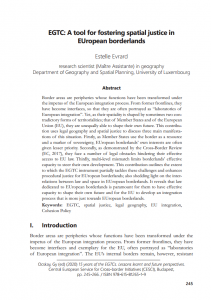 EGTC: A tool for fostering spatial justice in EUropean borderlands

Border areas are peripheries whose functions have been transformed under the impetus of the European integration process. From former frontlines, they have become interfaces, so that they are often portrayed as “laboratories of European integration”. Yet, as their spatiality is shaped by sometimes two contradictory forms of territorialities; that of Member States and of the European Union (EU), they are unequally able to shape their own future. This contribution uses legal geography and spatial justice to discuss three main manifestations of this situation.

Firstly, as Member States use the border as a resource and a marker of sovereignty, EUropean borderlands’ own interests are often given lesser priority. Secondly, as demonstrated by the Cross-Border Review (EC, 2017), they face a number of legal obstacles hindering their effective access to EU law. Thirdly, multi-level mismatch limits borderlands’ effective capacity to steer their own development.

Encapsulating the Significance of the EGTC for Territorial Cooperation: A literature... (Euro)régiók Európája
Scroll to top