You are here: Home1 / Social Capital and Governance in European Borderlands: A comparative study... 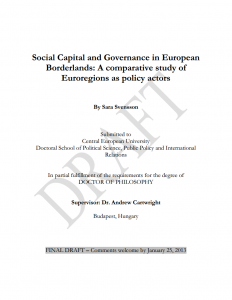 Social Capital and Governance in European Borderlands: A comparative study of Euroregions as policy actors

The dissertation contributes to the literature on multi-level governance in Europe and the literature on borderlands by investigating the mechanisms of local cross-border policy making. It focuses on motivation, participation and interaction patterns of one type of actors, the local governments that constitute the backbone of much institutionalized cross-border cooperation in Europe. As local governments, especially small ones, have frequently been neglected by researchers tending to focus on actors representing regional bodies or major towns, I argue that more attention to their attitudes and behavior can enhance our understanding of variance in function and performance of the type of institutions often referred to as Euroregions.

The dissertation uses the concept of social capital (as understood by Coleman, 1990) and addresses two specific questions: (1) Why and how do local governments participate in cross-border cooperation institutions (Euroregions) and how do they interact? (2) Can motivation, participation and interaction patterns form social capital that influences how the Euroregions function and perform? The dissertation relies on an extensive dataset consisting of more than 200 interviews. The core is 136 interviews with political representatives (mayors) and organizational representatives (Chairs and Managers) of six Euroregions located along three national borders that do not pose obstacles in terms of cultural-linguistic, economic development or politico-administrative differences, (Hungary/Slovakia, Sweden/Norway and Austria/Germany), thereby holding constant important factor that could affect the outcome.

A mixed-method approach is used in the analysis of the data, combining qualitative analysis with social network analysis. Results demonstrate that local governments’ motivation for joining and maintaining membership in a Euroregion is more frequently based on normative than on instrumental factors. Dense participation and communication patterns, indicating presence of social capital, are not clearly associated with high cross-border cooperation intensity, but for Euroregions to be evaluated favorably by its own members, both within-group (domestic) and between-group (transnational) social capital matters. Inter-municipal cooperation is a resource that plays an important role both at the time of Euroregional formation and later into its operation, and dense communication networks on one side of the border are related to how actively and engaged the members become in the Euroregional organization. Moreoever, normative motivation is more conducive for the creation of social capital than instrumental motivations; especially grant-driven expectations can lead to output legitimacy problems if not fulfilled.

The dissertation therefore argues that high levels of within-group social capital serve as a pre-condition for high levels of between-group social capital. However, evidence could not be found to support the expectation that a high-level of between-group social capital in the form of cross-border communication is associated with high organizational performance in the form of cross-border cooperation intensity. While social capital may still be important for Euroregional function and performance long-term (it is likely to enhance the chance for organizational survival), there is no clear evidence that it has an impact in the short time-span within which most Euroregions have operated so far.

CHALLENGES OF ESTABLISING AN EGTC IN THE TRIPLE BORDER AREA. THE CASE OF BANAT-TRIPLEX...