You are here: Home1 / The EGTC as a tool for Cross-border Integration? 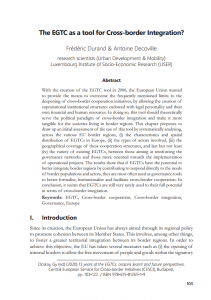 The EGTC as a tool for Cross-border Integration?

With the creation of the EGTC tool in 2006, the European Union wanted to provide the means to overcome the frequently mentioned limits to the deepening of cross-border cooperation initiatives, by allowing the creation of supranational institutional structures endowed with legal personality and their own financial and human resources. In doing so, this tool should theoretically serve the political paradigm of cross-border integration and make it more tangible for the societies living in border regions.

This chapter proposes to draw up an initial assessment of the use of this tool by systematically analysing, across the various EU border regions, (i) the characteristics and spatial distribution of EGTCs in Europe, (ii) the types of actors involved, (iii) the geographical coverage of these cooperation structures, and last but not least (iv) the variety of existing EGTCs, between those aiming at reinforcing the governance networks and those more oriented towards the implementation of operational projects. The results show that if EGTCs have the potential to better integrate border regions by contributing to respond directly to the needs of border populations and actors, they are most often used as governance tools to better formalise, institutionalise and facilitate cross-border cooperation.

In conclusion, it seems that EGTCs are still very rarely used to their full potential in terms of cross-border integration.

Theoretical Framework of the Cross-border Space Production – The Case of the... Eurometropolis Lille–Kortrijk– Tournai: Cross-border integration with or...
Scroll to top