You are here: Home1 / Theoretical Framework of the Cross-border Space Production – The Case o... 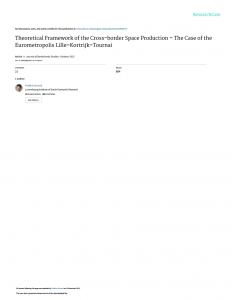 In order to better understand the features and functioning of the latter process, the concept has been deconstructed, highlighting four dimensions (structural, functional, institutional and ideational). The last part of this paper consists of the application of the grid analysis on the production of the cross-border space through the example of the cross-border metropolis of Lille–Kortrijk–Tournai.