You are here: Home1 / THE ESZTERGOM CENTERED REGION’S PAST AND FUTURE 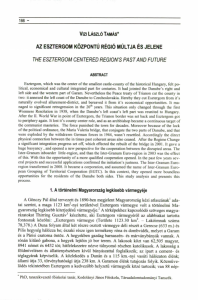 THE ESZTERGOM CENTERED REGION’S PAST AND FUTURE

Esztergom, which was the center of the smallest castle-county of the historical Hungary, felt political, economical and cultural integrated part for centuries. It had jointed the Danube’s right and left side and the western part of Garam. Nevertheless the Peace treaty of Trianon cut the county in two: it annexed the left coast of the Danube to Czechoslovakia. Hereby they cut Esztergom from it’s naturally evolved allurement-district, and bereaved it from it’s economical opportunities. It managed to significant retrogression in the 20th years. This situation only changed through the first Wiennese Resolution in 1938, when the Danube’s left coast’s left part was reunited to Hungary.

After the II. World War in point of Esztergom, the Trianon border was set back and Esztergom got to periphery again. It lost it’s county center role, and as an archbishop became a continuous target of the communist masteries. The force punished the town for decades. Moreover because of the lock of the political ordinance, the Maria Valeria bridge, that conjugate the two parts of Danube, and that were exploded by the withdrawn German forces in 1944, wasn’t resettled. Accordingly the direct physical connection between the in times past coherent areas also ceased. After the Regime Change a significant integration progress set off, which effected the rebuilt of the bridge in 2001. It gave a huge buoyancy , and opened a new perspective for the cooperation between the disrupted areas.

The Ister-Granum inboarder little-region, and than the Ister-Granum Euro-region in 2003 was the effect of this. With this the opportunity of a more qualified cooperation opened. In the past few years several projects and successful applications confirmed the initiation’s justness. The Ister-Granum Euroregion transformed in 2008. It became a corporation, and assumed the name of Ister-Granum European Grouping of Territorial Cooperation (EGTC). In this context, they opened more boundless opportunities for the residents of the Danube both sides. This study analysis and presents this process.

Demonstrating good practices in municipal management in the territory of the...
Scroll to top