You are here: Home1 / Ister-Granum EGTC

In connection with the Ister-Granum EGTC’s project called WaVE, a video was made presenting the project, its objectives and results so far 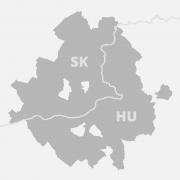 The partners (Ipolydamásd, Štúrovo, EGTC) created the design documentation linked to the EuroVelo6 for the cycle path between the municipalities of Štúrovo – Kamenica nad Hronom – Chľaba (SK) and Ipolydamásd – Letkés (HU), and they would like to implement the construction of this 16-km-long cycle path from the tender support. Based on the cycling strategy made for the Ister-Granum region, the Ister-Granum EGTC implements missing resting places (10) and information boards (150), and promotes the cycling paradise according to the tender.

The aim of our tender is to establish a cross-border public bicycle rental system, which is the first and only in Europe. A new public transport service will take place on the Slovak-Hungarian border, which will contribute to a better connection between the two border towns. Within the framework of the tender, bicycle rental stations will be established in several spots in both towns, where electric bicycles can be rented as well as conventional bicycles. As a result of the system’s joint development, anyone can rent a bicycle at any docking station and they can return the bicycle to any station as well. Stations will be established by each significant municipal function (office functions, transport functions) in both municipalities.

The aim of the project is for the project partners operating in the V4 countries to investigate and assess the employment opportunities of technical secondary school graduates in their learned profession. Organising study trips within the framework of the project, during which they could get to know the neighbouring countries’ (Slovakia, Poland, the Czech Republic) good practices and experiences of agriculture students’ employment opportunities. They summarised the local opportunities in a study, and they made separate questionnaires for students, agricultural entrepreneurs and companies – getting to know the demands and requirements of the two parties.

You Are What You Eat – The project supports local product sales in the region by giving the producers the necessary information and knowledge to increase sales. So the partners organise a professional conference in both regions. One of the conferences discusses the legal background of local product sales on the other side of the border, while the other one investigates the opportunities of local product sales, marketing ideas and methods, and there is also a day of practice, where there will be a workshop and people can get to know best practices. Finally, a publication will be made in the topic.

A complete database of the local producers in the municipalities of the concerned area will be conducted within the framework of the project. We are mapping the existing opportunities and demands in the region producer campaigns and personal interviews. We are expanding the legal knowledge of producers with trainings, and we are planning on providing them with useful information in the field of marketing as well. We are organising two workshops in order to involve local governments, exchange experience and strongly support the project. In order to raise the awareness and assess the demands of local residents, we are organising two cultural events (to ensure a possibility of meeting for producers and customers), and we are implementing them as “family friendly” events, providing programmes for the children as well. The trademark of the local product network is planned in both countries. The image of the trademark programme will be created and the communication strategy will be specified.

Creating a publication that gives a preview of the rich product range of the geographical and econimic units in the Ister-Granum region. The aim of the introductory booklet is to describe the producers of the region and the market of the local producers. We should promote them as widely as possible. Our goal with this is to ensure the market access of local producers, to improve the employment situation, reduce unemployment, improve the acceptance of legal product markets and encourage the establishment of new ones, and to increase the demand for local products in the region.

Organising a study trip. We have brought the mayors, local producers, Leader group members and civilians of the region to Székely Land for them to get to know the local small-scale farming, the move towards self-sufficiency and the institutions, programmes and good practices supporting that.

A selection of local delicacies -Wines in the region of Ister-Granum. Publishing a publication about the oenologists of the region.